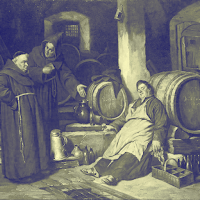 The village is abuzz with rumors- just what exactly is going on up at the Abbey? Do you believe the crofter's tale of raucous laughter and bawdy music lasting late into the night? And is it true the milkman came across Friar Rush snoring on the chapel steps last Sunday morning?

Description: This minor devil (see True Form) has taken on the appearance of a human nun or friar. They're exceptionally jovial, in fact, some would even say debauched (and they'd be correct).

Wants: Naturally they want to gain residence at an abbey, where they will engage in increasingly bacchanalian behavior and will strongly encourage others to do the same.

Abbey Lubbers wish to see their home abbey become infamous for debauchery. If and when they successfully persuade all the abbey's residents to join in one of their revelries, it is said the Horned One will make an appearance.

If Confronted:  They will fight when given no alternative, but much prefer to use charm over force. They typically flee confrontation while laughing and snatching up any intoxicants in reach. However, an Unseelie Abbey Lubber once cooked a teetotaler monk into a pot of stew.

Weaknesses: They cannot help flinching with discomfort upon hearing or witnessing disrespect towards faeries and their kin.

Banishment: They can be banished from a place by speaking their true name three times and commanding them to leave. They may inadvertently reveal their true name while drunkenly singing or mumbling in their sleep.

If Detect Magic is used, the caster will perceive a purple-black halo flickering above the Abbey Lubber's head.

Charm Person: Abbey Lubbers may cast this spell once per day.

Paralysis: Successful bite attacks cause paralysis for 2d4 turns (save versus paralysis negates).

True Form: Their body shrinks down as his head swells up, as their nose turns (even more) red. They spring from their frock or habit (which is now far too large), having become a fuzzy faun-ish little being with a round belly and bright green breeches. An oddly wide grin reveals pointed teeth.

Faerie Door: The Abbey Lubber may trace the outline of a door onto a wall, standing stone, or tree trunk. A tearing sound rings like thunder, the surface shimmers, and they may now leap through the door, which vanishes shortly after.

Anyone who follows will find themselves sprawled upon the ground, having been launched out from a nearby door, window, or bush. Anything they were carrying or wearing will be piled in a heap in front of the portal.